When Your Church Buys You A Car: A Lesson in Radical Generosity.

If you’re reading my blog you know that I am a millennial Christian woman writing to such a general population of readers (although not limiting myself to that constituency alone.) But, because I am a Christian, I have spent much of my life involved with churches over the last 27 years. There are so many wonderful things about the American church, the German church, the Korean church, and every other member of the body of Christ worldwide; too many to list. One of the things churches are supposed to be most known for is their generosity. Jesus was radically generous every day, wasn’t He? And for the first time in my life I can personally vouch for the existence of church-leader led generosity.

Unfortunately, a church culture of generosity as demonstrated by the leadership is not a characteristic I have personally experienced in my time of church going. But, I can’t allow myself to go any further before saying this: I and many others have been on the receiving end of generosity from MANY church-going saints. The church is full of givers and people who would give more to those in need if they had it to give. And I know that many churches fund missionaries and give to various ministry centers and aid groups. All of this is wonderful, generous, and needed. The kind of generosity that I have never seen or heard of (without some huge public spectacle) is the church taking care of the needs of its average member.

I remember often times wondering who within my community were the churches I’ve grown up in actually helping. I’d wonder this because I felt I met tons of people regularly attending Sunday services that had financial, emotional, spiritual, and relational needs that were immense. These people appeared to be often overlooked or avoided. And I know this could just be my perspective, and/or there could be thousands of reasons why church members aren’t taken care of. But I mean, people are tithing, so where is that money going? Is it just going to pay bills, salaries, and bless people we never see? Or could more be done for those under the churches literal roof? Here’s the thing I see in the Book of Acts:

“Now all who believed were together, and had all things in common, and sold their possessions and goods, and divided them among all as anyone had need. So continuing daily with one accord in the temple, and breaking bread from house to house, they ate their food with gladness and simplicity of heart, praising God and having favor with all the people. And the Lord added to the church daily those who were being saved.” – Acts 2:44-47 (Emphasis added)

What I see in those verses is a model. It’s a model for how the church is supposed to function and how it will remain healthy and growing. You want your ministry to grow? Start taking care of those that are within it. Lead by example. Don’t focus so much on those who aren’t yet a part of the church that you forget those who are. When God first blessed and boomed the church He did so as a result of those taking what they had and giving it to those who had need. In the end, we’re supposed to love and take care of each other with such lavishness that the world looks on in envy and says, “I want to be a part of that.” If we’re all poor, starving, depressed, and left to take of care of ourselves with no help from the church…what the heck makes us appealing to the world????

So that leads me to the dramatic act of generosity bestowed upon me by my church, Calvary Chapel Chattanooga. As per my last blog, you probably know that I was in a bad car accident almost two weeks ago. It totaled my car and due to having only liability insurance on it and literally NO additional money to pay for a new car, I was in a tough spot. All I could do was trust that God had a plan. And plan He did have. After the police picked me up from my wreck site they asked me where I needed to be dropped off. I requested the church because it was close and because I knew at least from there I might wrangle up a friend who could take me home. Shortly after walking in the doors (having been dropped off front and center in a police squad car) word spread about what happened to me. One of the church leaders approached me and offered me food and water. Shortly after, he had found a young college student who was ready to drive me home in my shocked state.  Right before I left he made this comment, “We’re going to take care of your rental car and please don’t go looking for a vehicle just yet, we’re going to take care of that too.” I was still in shock from the accident, but his statement seemed to jar me equally as much. “What did he just say??” I thought to myself.

That afternoon, after being released from the hospital with a good report, my parents arrived at my home and took me to meet this church leader to discuss his rental car proposal and pay the tow truck company. My parents are still currently not in a financial position to help me like they would like to so his offer of a rental car was desperately needed. Sure enough, a couple hours later I was handed the keys to a beautiful new rental car. The church leader then said, “Let’s take a few days and pray about things. We don’t want to get ahead of God and panic and just take any car we find. Let’s wait on Him and see what He can do and trust that He’ll lead us to the right vehicle.” Ten days later I’m called and asked to drive to a car dealership in Dayton, Tennessee where I’m handed the keys to a beautiful used 2007 Saturn. They even paid for my tax, tag, title and registration. They didn’t ask me for a penny. They didn’t make a spectacle of me by making me stand in front of the church congregation as they ceremonially handed me the keys. It was low-key, hush hush, radical GRACE and GENEROSITY. They saw a need, felt they were in a place to help, and then helped. That was it.

After getting the call that they had a car for me I said to the leader, “I don’t even know how to receive something of this magnitude. No one has ever done anything like this for me.” He laughed slightly on the other end and very emphatically said, “Well, I’ll tell you what you do to receive this. Drive down to the car lot and pick up the keys.” And that was that.

I want to tell this story because God deserves all the glory possible from their good works, since He was the Author of it afterall. They aren’t bragging and boasting over their generosity, in fact if I weren’t telling the story, no one but God would know what they’ve done for me. But in the hidden acts of kindness there is public blessing. The church is growing at an incredible pace and that would align perfectly with those scriptures in Acts 2, “…And the Lord added to the church daily those who were being saved.” So there you have it. Love and radical generosity is the recipe for church growth. It’s really not that complicated. Sure, church members could and should be doing it daily, but when the leadership steps up and creates an entire leadership culture based around radical generosity you’ve just created something THAT WILL CHANGE THE WORLD. 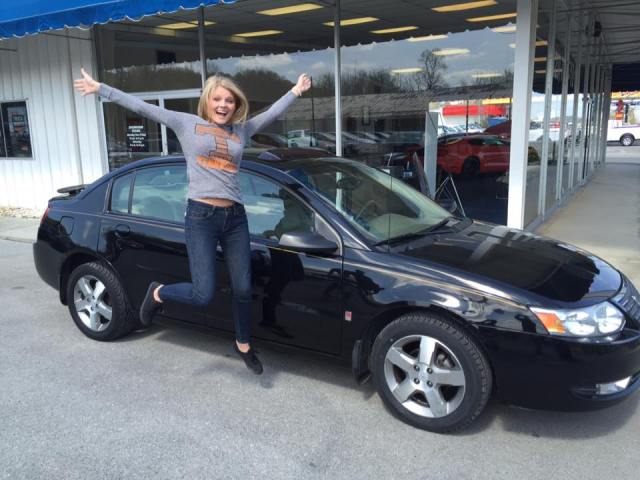 That’s me and my new baby, courtesy of Jesus. This is the Kingdom of God.

Thankful and blessed beyond all recognition,

One thought on “When Your Church Buys You A Car: A Lesson in Radical Generosity.”

Leave me your feedback! Cancel reply